Empire : How Britain Made the Modern World (Popular Penguin) by Niall Ferguson

Niall Ferguson's Empireis one of the most successful and controversial history books of recent years. Brilliantly re-telling the story of Britain's imperial past, it shows how a gang of buccaneers and gold-diggers from a rainy island in the North Atlantic came to build the most powerful empire in all hi story, how it ended, and how - for better or worse - it made our world what it is today. ...Show more 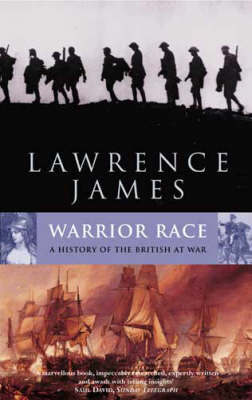 Modern Britain is a nation shaped, both geographically and culturally, by wars. The essence of its identity is the warrior heroes, both real and fictitious, who still capture the national imagination: from Boadicea to King Arthur, Rob Roy to Henry V, the Duke of Wellington to Winston Churchill. In Warri or Race, Lawrence James draws on the latest historical and archaeological research, as well as numerous previously untapped resources, to chart the full reach of British military history. He explores the physical and psychological impact of Roman military occupation, the monarchy's struggle for mastery of the British Isles, the civil wars of the seventeenth century, and the "total war" experience of twentieth-century conflict. But Warrior Race is more than just a compelling historical narrative. James skillfully weaves together the many themes of his subject, discussing the rise, survival, and reinvention of chivalry; the literary quest for a British epic; the concept of birth and breeding as qualifications for command in war; and the issues of patriotism and Britain's antiwar tradition. This is popular history at its very best: incisive, informative, and accessible; immaculately researched and hugely readable. Balancing the broad sweep of history with an acute attention to detail, Lawrence James never loses sight of this most fascinating and enduring of subjects: the question of British national identity and character. ...Show more Children of the Raj by Vyvyen Brendon

Vyvyen Brendon's evocative, at times heart-tugging book, runs from the 18th century and the East India Company, through the Afghan wars, the Indian mutiny and the more settled era of the Queen Empress, and culminates in the conflict leading to Britain's hurried exit in 1947. Its subject is the young pro geny of traders, soldiers, civil servants, missionaries, planters, engineers and what should be done with them. Until the coming of air travel these children often only saw their parents every few years. Then there were the children born of Anglo-Indian marriages and affairs. Sent back to Britain they were often reviled as 'darkies', 'a touch of the tar-brush'. And then there were the children educated in India. Brendon reveals appalling stories of abuse at the hands of servants. What frequently unites Brendon's wildly different subjects is their loneliness--drawing on letters, diaries, memoirs and interviews, she portrays children who had to discipline themselves to adapt (often ingeniously) to unfamiliar cultures, far away from family and forced to spend termtime in boarding schools and holidays with unfamiliar families. ...Show more 'By far the best single-volume description of the mutiny yet written' - Economist A beautifully written and meticulously researched narrative history of the great Indian uprising of 1857 by one of our most acclaimed living historians. First published in 1978 and re-issued with a handsome new cover for t he 2002 paperback edition. ...Show more Last Thousand Days Of The The by Peter Clarke

The British Empire effectively ended with Indian Independence in August 1947. How did this rapid change of fortune come about? This book analyses in detail the losing hand which Britain was dealt in the last year of the war, and then to see how that hand was played over the next two years by Churchill's successors. ...Show more Gibraltar and its Sieges Empire: What Ruling the World did to the British by Jeremy Paxman

THE INFLUENCE OF THE BRITISH EMPIRE IS EVERYWHERE, from the very existence of the United Kingdom to the ethnic composition of our cities. It affects everything, from Prime Ministers' decisions to send troops to war to the adventurers we admire. Whether it's the sports we think we're good at or the archi tecture of our buildings, the way we travel or the way we trade, the hopeless losers we urge on or the food we hunger for, the British Empire is never far away. In this acute and witty analysis, Jeremy Paxman goes to the very heart of empire. As he describes the selection process for colonial officers ('intended to weed out the cad, the feeble and the too clever') the importance of sport, the sweating domestic life of the colonial officer's wife ('the challenge with cooking meat was 'to grasp the fleeting moment between toughness and putrefaction when the joint may possibly prove eatable'') and the crazed end for General Gordon of Khartoum, Paxman brings brilliantly to life the tragedy and comedy of empire and reveals its profound and lasting effect on the British. 'sardonically funny.' Daily Express 'witty, incisive, acerbic and opinionated... His research is wide-ranging and his treatment consistently stimulating. In short, he carries the whole thing off with panache bordering on effrontery.' Sunday Times 'A very engaging account, built mainly around dramatic incidents in exotic places...... with a good sprinkling of jokes, funny nicknames and sexual references.' Guardian 'An entertainingly sardonic survey of imperial projects.' Times 'Paxman has an eye for detail, and his sharp intelligence quickly detects, and ridicules, the eccentric and plain weird.' The Observer 'He writes with wit and penetration, and every page of Empirecan be read with relaxed pleasure.' Spectator ...Show more

The Indian Mutiny by John Harris

The Indian Mutiny of 1857 was a huge and bloody struggle, a devil's wind of retribution and death that swept across the jungles, hills and parched plains of the Indian sub-continent.