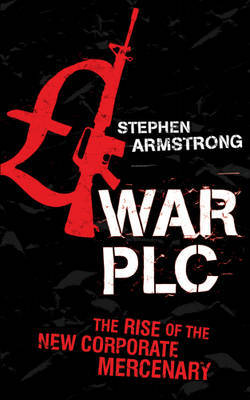 War plc : The Rise of the New Corporate Mercenary

No longer dogs of war running ragtag armies, the new breed of private soldiers operate their million-dollar contracts from executive boardrooms worldwide. Whether they're ex-special forces, CIA spooks or Foreign Legionnaires, you'll find them exchanging gunfire with insurgents in Baghdad, patrolling government buildings in Afghanistan, or spying on environmental protestors. The lucrative contracts of the 'War on Terror' have made their plans even more ambitious - to offer governments and corporations discrete and well-trained private armies. These corporate soldiers are part of the last great outsourcing - the privatisation of war. This book examines how we got here, how these companies operate, and how close we are to letting them run our battlefields. First published 2008.

Step into the world of the private security contractor - a stock-market-listed corporate version of the mercenary.

Stephen Armstrong is a freelance journalist who writes for the Sunday Times, the Guardian, the New Statesman, GQ and Esquire as well as presenting the occasional documentary on Radio 4. This is his second book.